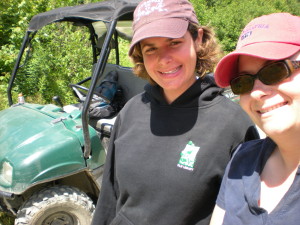 Sarah Katz has worked with award winning production teams in television and multimedia for more than fifteen years. Her experience encompasses roles as Producer, Writer, Director, Shooter, Associate Producer, and Researcher. While completing Moosehead’s Wicked Good Plan she has been working on the National Geographic Wild series, Mission Critical, about NG photographers documenting threatened wildlife. She recently stepped down as a board member of Docs In Progress where she organized the first annual Documentary Inspiration Award. Sarah was honored to present awards to Oscar nominated filmmakers Marshall Curry and Matthew Hamachek.

Prior to her most recent stint at Nat Geo, Sarah was an International New Media Producer with the U.S. Department of State and a Producer at The Great Courses. At The Great Courses she produced over 156 half hours of educational content covering topics from science to literature and archaeology. She has credits on over forty documentaries for the History Channel, National Geographic Television, Biography, Planet Green, and Investigation Discovery. Sarah also received a Masters of Fine Art in Film from American University in 2009. She was awarded the Guy P. Gannett journalism scholarship from the Maine Community Foundation. She is a member of the Producers Guild of America’s New Media Council and Women in Film and Video, DC.